Perhaps you’ve heard about Comcast’s New Data Caps. They are very real…and very low. If you stream a lot of video, EVEN USING the XFINITY STREAM app, you WILL go over. Even if you only have HD…not even 4K…video.

Of course…They offer an ‘Add-On Unlimited’ plan for an extortionate price that’s more than some pay for their unlimited cell service each month. That’s just so nice of them.

Let’s stop for a second to reflect that this is occurring during a pandemic, where most Americans are stuck at home and depending on the Internet for remote learning for the kids, and just trying to stay connected to the world with video chats and Zoom calls. While many are struggling to pay bills and feed their families… In THIS environment, Comcast is choosing to place a stiff tax on the Internet service its customers are now so dependent on. Holy crap! That’s some cold blooded Bernie Madoff shit. Almost as bad as say, shorting airline stocks on 9/11.

“How do they think they can get away with it?”, you ask.

Such an atrocity can only occur when a company has an unfair advantage over its customers, like the last mile monopoly that most cable companies…including Comcast around my house…fight HARD to maintain. If there’s no competition, you can’t really DO anything about it. That’s likely ending soon, once 5G coverage and devices converge to dilute this wiref monopoly, but not soon enough.

For now, it seems Comcast knows it’s coming, and has decided that in the meantime, they should fleece their customers for every last cent they can. In this case, for the SAME SERVICE they currently provide (often poorly I might add). It’s criminal. Literally.

We use Comcast’s Xfinity Stream app exclusively to watch TV in our house. We have 200mbps service and usually get around 110mbps. We don’t have movie channels, a cable box or any extras like pay per view. It costs around $145 a month. We have two HD (not 4K) smart screens and generally one of them is on all the time, rarely both. Based on network tracking, these two screens make up 85-90% of our data usage, and are almost exclusively streaming Live TV via the XFinity Stream app. So THAT’S what is pushing us over the unreasonably low 1.2TB Data Cap, as each screen uses around 30GB per day or around 900GB per month. JUST TO WATCH TV (HD) that is INCLUDED in our package on 2 screens, we can exceed our data cap and incur up to $100 in EXTRA charges!!!

Sure, we could Buck Up and pay the $30 surcharge for ‘Unlimited’ data, but honestly I would sooner MOVE. How long before the ‘unlimited’ data gets soft capped and slowed down? Or they get rid of ‘unlimited’ altogether, in favor of metering? The abuses will continue until they no longer have that last mile monopoly advantage. You can yell. You can scream. You can write angry letters. You can get fed up and pull the plug…or even move.

You can also contact Comcast and complain. Do it NOW before you start getting charged extra. I can’t tell you if it will help, because I am still in conversation and so far they’ve offered no suitable resolution.

Or you can suffer, cut back on usage or pay extra and wait. Wait, until 5G is everywhere and Comcast becomes just another telco company competing for your business. Right now, they think they don’t have to compete. They think profiting on the suffering of others during a pandemic is fine. I’m telling them…and everyone else who can read, it’s NOT fine. At all.

Who needs probable cause when you have geeks? That appears to be the thinking of the FBI, which has been working with Best Buy’s computer repair service Geek Squad for at least a decade. And we’re not talking about geeks fixing Bureau computers. SEE ALSO: The FBI has a ‘huge’ problem with your smartphone Instead, according to documents obtained by the Electronic Frontier Foundation, the law enforcement agency has paid Geek Squad employees to act as informants and report potentially illegal content found on customers’ computers. What’s more, in at least one case it appeared that an employee may have proactively searched a computer for suspicious content — as opposed to just reporting what he or she inadvertently stumbled across. Read more… More about Fbi, Best Buy, Geek Squad, Tech, and Cybersecurity Author:Jack Morse #pch3lp #tech #TheNewz #TechNews source: https://mashable.com/2018/03/06/geek-squad-fbi-informants/?utm_campaign=Mash-Prod-RSS-Feedburner-All-Partial&utm_cid=Mash-Prod-RSS-Feedburner-All-Partial Please visit our website: http://pcproactive.com
via http://pcproactive.com
https://mashable.com/2018/03/06/geek-squad-fbi-informants/?utm_campaign=Mash-Prod-RSS-Feedburner-All-Partial&utm_cid=Mash-Prod-RSS-Feedburner-All-Partial 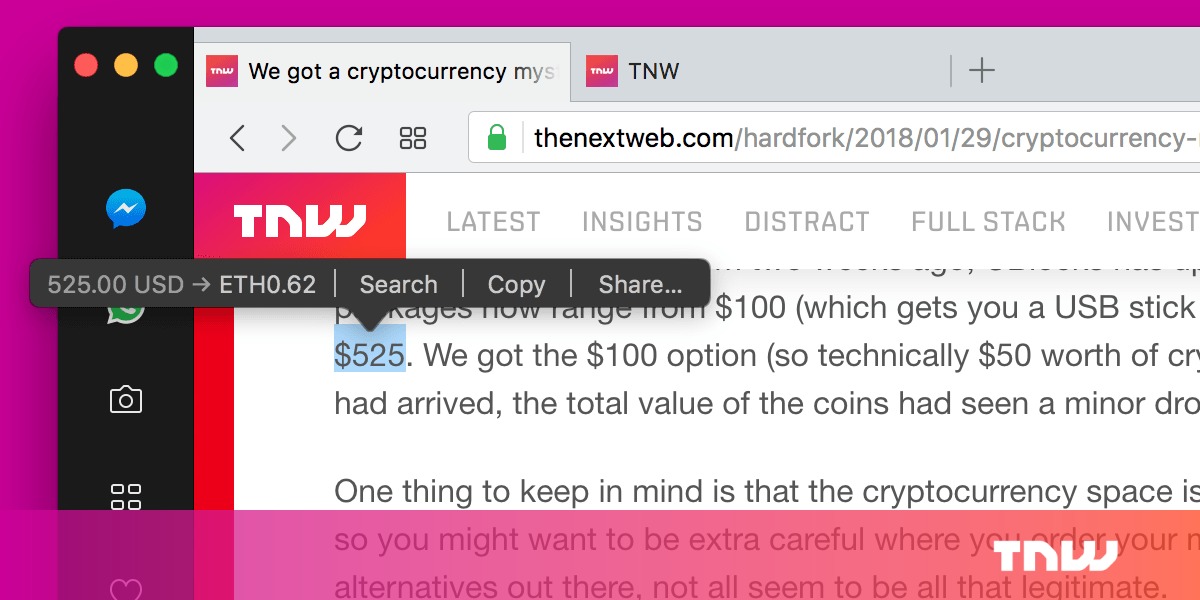 Earlier this year Opera announced it is updating its built-in currency converter to support cryptocurrency, starting with Bitcoin (BTC), Ethereum (ETH), Bitcoin Cash (BCH), and Litecoin (LTC). The feature has been there for a couple of months now, but it seems it has remained under the radar for most crypto-enthusiasts – which is why we decided to give it a spin. For those unfamiliar, the currency converter essentially lets you convert fiat currencies to BTC, BCH, ETH or LTC by simply highlighting the original amount – without leaving the site or using third-party converters. Here is how it looks: Opera… This story continues at The Next Web Author:Mix #pch3lp #tech #TheNewz #TechNews source: https://thenextweb.com/hardfork/2018/03/06/opera-cryptocurrency-converter-bitcoin/ Please visit our website: http://pcproactive.com
via http://pcproactive.com
https://thenextweb.com/hardfork/2018/03/06/opera-cryptocurrency-converter-bitcoin/

Google has partnered with the United States Department of Defense to help the agency develop artificial intelligence for analyzing drone footage, a move that set off a firestorm among employees of the technology giant when they learned of Google’s involvement. Read more… Author:Kate Conger and Dell Cameron #pch3lp #tech #TheNewz #TechNews source: https://gizmodo.com/google-is-helping-the-pentagon-build-ai-for-drones-1823464533 Please visit our website: http://pcproactive.com
via http://pcproactive.com
https://gizmodo.com/google-is-helping-the-pentagon-build-ai-for-drones-1823464533

Between cable networks putting out fantastic shows, streaming platforms making serialized originals, and broadcast networks trying to keep up, keeping track of all your shows can be a headache. The Trakt.TV service can help. Author:Michael Crider #pch3lp #tech #TheNewz #TechNews source: https://www.howtogeek.com/344898/how-to-keep-track-of-your-streaming-and-broadcast-shows-with-trakt.tv/ Please visit our website: http://pcproactive.com
via http://pcproactive.com
https://www.howtogeek.com/344898/how-to-keep-track-of-your-streaming-and-broadcast-shows-with-trakt.tv/