If you’ve ever thought it would be useful to save objects or entire slides from your PowerPoint presentation as images to use in another program, then you’re in luck! You can do precisely that in a few simple steps.

Saving Objects as Images in PowerPoint

Saving an object, or even multiple objects, from your PowerPoint presentation is extremely handy. The thing that makes this trick so useful is that the objects are saved, by default, as a transparent PNG file, meaning that you won’t have the invasive background that you would otherwise have if you just took a simple screenshot.

We’re going to use the following slide as an example over the next few sections. In this slide, we have a total of four objects. 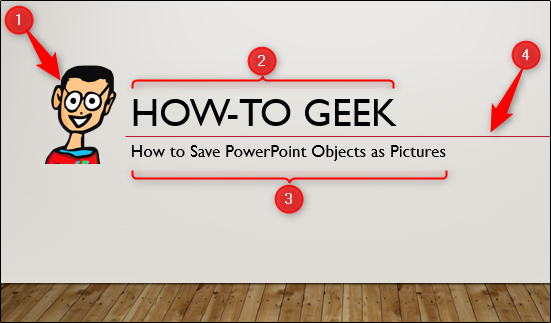 Save a Single Object as an Image

To save an object as an image, we first need to select the object to be saved. In this example, we’ll select our title.

Right-click the object and select “Save as Picture” from the menu that appears.